We’re four months away from having a 2-year-old. How is that possible? 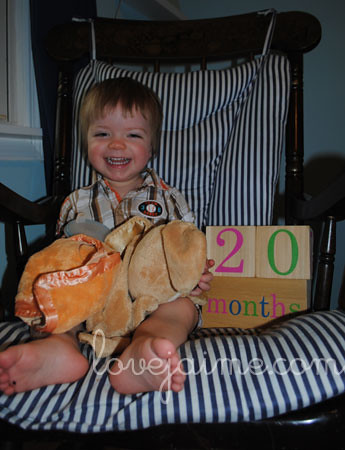 Monthly photos continue to be challenging. 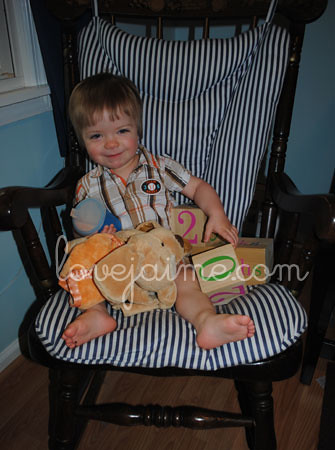 Talking is not a challenge.

For several weeks (before he was 19 months, even), he’s been telling us when he needs to be changed. This month, he took it a step further by telling me, “Change? I poo poo.” all while patting his bottom. It’s cute, and at the same time, I am not ready for this next step. The doctor told us at 18-months that he was showing signs and that we could introduce him to potty training at any time. We’ll probably start doing more introductions this month. 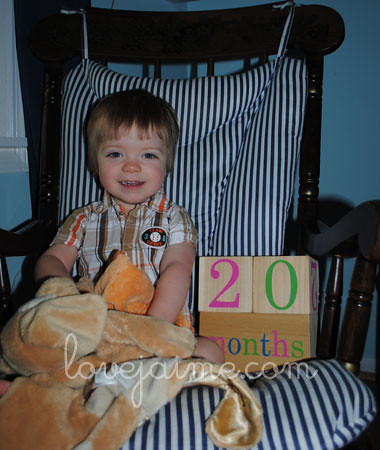 He loves balloons and dogs and cats and music. He can say “Usher” when he hears the opening notes to “DJ Got Us Falling In Love” and in the middle of the song he’ll sing “down down down.” He sings E-I-E-I-O during Old MacDonald, and he just started singing “all through the town” during the “Wheels on the Bus” song.

We have dealt with a true language explosion. 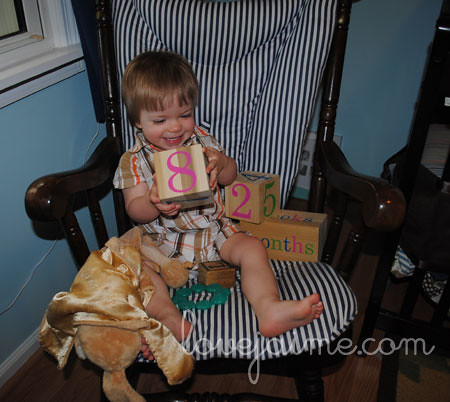 He absolutely loves reading. Some nights we have to force him to go to bed because he wants to read another book. (And we read, on average, 5 books at bedtime. Last night it was over 10.) He peruses the book before he allows you to read it to him.

He also loves to dance. We listen to music every night and most mornings. He requests it and if the tv is on, he’ll turn it off so he can hear his music better.

He can be a picky eater, unless it’s pizza and then he wants it all the time. One morning recently, I heard him in his crib and he was saying, “pizza? pizza!” It’s kind of like when we say “walk” around my mom’s dog. It is going to end in a walk, so we don’t say pizza in our house unless we have it to give him.

He still breastfeeds, and we’ve dropped back to twice a day. He’ll request it more often, but he doesn’t always drink milk at daycare, so I know he doesn’t “need” it. (I still have so much frozen, he’ll be drinking it for a couple more months.)

I’ve been planning his birthday party and I can’t believe it’s just four months away. Don’t worry, I’m not deep into planning. Just buying a few things here and there.