It took two sessions to get photos of our almost two-year-old. The second time he just wanted to “zoom” his car over the blocks. Whatever it takes. Also, it has taken a week to get this posted. Life is busy with a toddler. 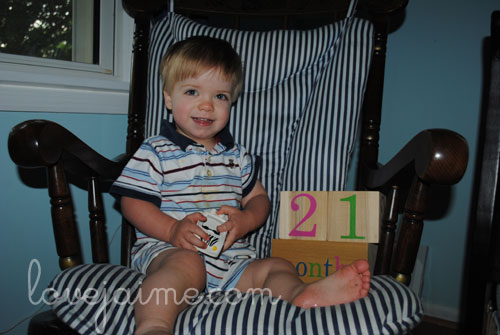 This kid says sentences. It’s mostly, “I need up!” or “I need MILK!” I need. I need. He often says “mine” and he’s added a plethora of other words to his vocabulary. Oh and he also says “I want …” So that’s fun. This past week he even learned what a monkey says (and it involves a lot of high-pitched squealing.) He says “car, truck, bus” when he sees either. We try not to say two words in our house because it only leads to two things: Elmo and pizza. 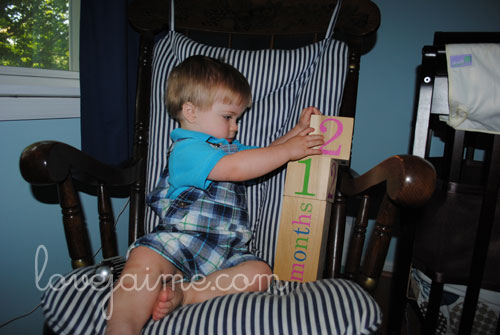 We’ve also learned that he knows shapes. He was building a “house” (anything with blocks is a house) and he was telling us the shapes on the blocks. Triangle, square, circle, heart, star. HE KNOWS SHAPES! Day care is teaching him so much. (We have to give credit where credit is due.)

He’s wearing some 24-month clothes, but his 18-month shorts fit him great right now (and they’re a little big. Poor kid is going to be short like his parents.) I think his super active lifestyle is keeping him extra toned/thin. 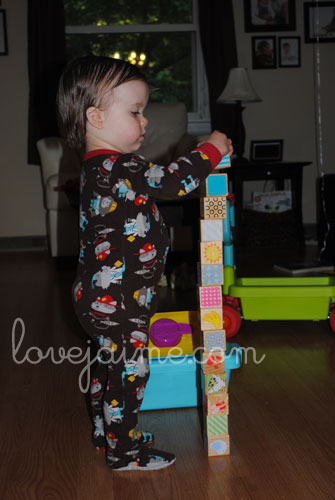 He loves Chloe. And Phoe (Sophie). He calls almost all cats “Chloe”. He also continues to love music. We often hear him singing his ABCs or E-I-E-I-O or Farmer in the Dell (Farmer in the Know.)


He hates his rocking horse. Worst first birthday present ever. It’s currently in the guest room and he stands outside of the room and waves hi and bye to it. I have video of him saying “bye neigh neigh” (what he calls the horse):

He loves being outside. He still hates most solid vegetables. And meat is touch and go for him. He loves smoothies with his breakfast, eggs (some days), pancakes or waffles most days, bananas (which he calls “benas”), apples, raisins, spaghetti, pizza, turkey bacon, applesauce, cheddar bunnies.

He nurses once a day (at bedtime) and we’ve dropped all other sessions. He still asks for it, but we can give him milk in a cup or distract him.