No, we are not having another baby. Not for a while, at least. (Remember? Mine doesn’t sleep. Until he sleeps, he’ll more than likely be an only child.) My friends, April and Shawn, are expecting their second baby right around the new year, so I threw a small baby shower for them. (Their first daughter will be 9 in February. I think it’s safe to say that they could use a few newer baby items.)

I’ve been so busy, that I ended up planning this at the last minute. I’ve been scouring Pinterest, and originally had owls on the brain. And then when I was looking at Target for invitations, I found a simple pink invitation – and these napkins on clearance. 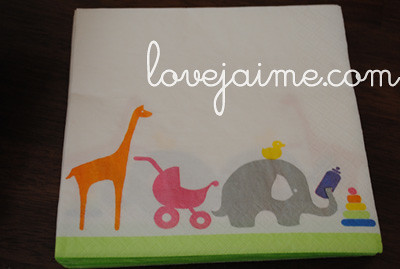 And a new theme was born. Elephants!

I wanted to stick with a pink and gray color scheme. I decided to make a bunting with some polka dot fabric I found (and got super cheap with a 50% off coupon.) I had bought 3/4 of a yard, and was left with a lot leftover, so I decided to make a tiny bunting. I think they both turned out really cute! (The large one says “welcome baby” so I can use it for other showers or I can gift it to someone for a shower.) 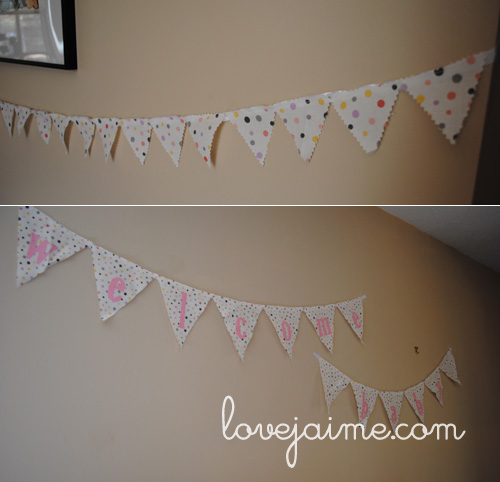 I found elephant cookies on Pinterest. The cookies were super cute, with royal icing and the whole nine yards. I knew I couldn’t make anything that elaborate, but I could do sugar cookies. I bet I could make them pink. So I ordered an elephant cookie cutter, and two days before the shower, these guys were created. 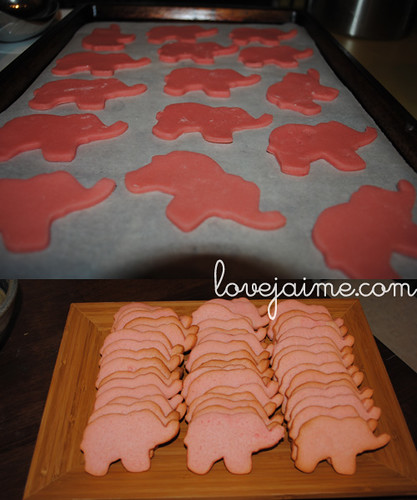 Cute, right? I made over 50, and April took the remaining 6 cookies home with her. They were really good.

Of course, I also made cupcakes. (And food not pictured – chips, more chips and salsa, pretzels and a key lime dip I made, and a vegetable tray to balance the junk food out.) 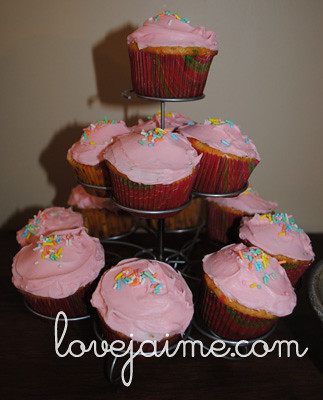 I set up a table for decorating onesies and burp cloths. The night before I cut out some shapes so people didn’t have to be super creative, if they weren’t feeling crafty on Saturday. Turns out, we have some very creative friends and they came up with a few elaborate onesies, which I unfortunately did not photograph before they went home with April. (I bought two fat quarters of fabric at JoAnn’s for under $2 per piece. I already had Wonder Under, which made them fusible. The blue fabric was leftover from the diaper bag I made over a year ago.)

And, of course, there was a diaper cake. I think I’ll be posting a diaper cake tutorial at some point – I’ve had a few questions about how to make them. This cake was fun. It’s two packs of diapers, gray and pink ribbon, and I found the pink elephant on top at Target. I also had Mendie make the elephant clippies! Cute, right? 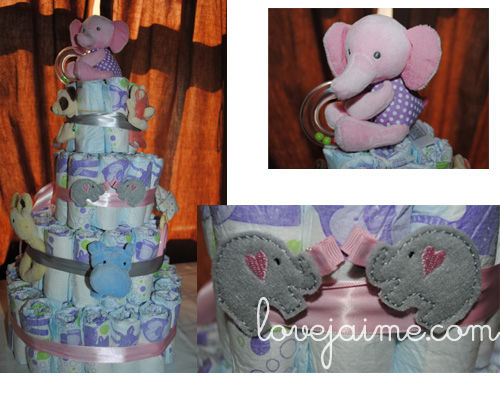 Overall, it was a small shower, but I think everyone had a good time and the mom-to-be got some great stuff. Did I mention that I planned this all out over the course of two weeks? I wouldn’t advise doing that. In the end, though, I was so pleased with how everything turned out!

The Best Tie-Dye Kits for Beginners