It’s (almost!) fall! I love autumn. And this past weekend, the weather definitely felt like fall. (Well, with the exception of the hour or so Saturday afternoon when we were on a field and it was 80 degrees and SUNNY. It felt much hotter.) Yesterday was in the upper 60s/lower 70s, breezy, and definitely fall-like.

There is a corn maze about half of a mile away from our house. This year, the husband took advantage of volunteering for them (on Friday night) so we could get free tickets to the maze. We thought about using the tickets in a few weeks, but by the time we could go again (possibly mid-October), the weather may not be cooperating and by that point, the corn has been trampled on by so many people and the maze isn’t quite as enjoyable.

We went last year, taking the kiddo when he was just weeks old, and it….was interesting. The weather was so hot last year, and we made the mistake of taking the baby in a navy blue Moby wrap (think: 6 yards of cotton fabric) while the husband was wearing a black shirt. HOT. This year, we took the jogging stroller, and stuck the Ergo in the bottom, just in case he didn’t want to sit in the stroller any longer. 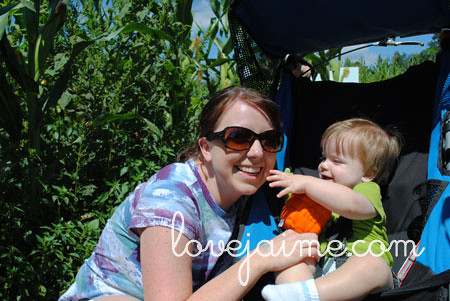 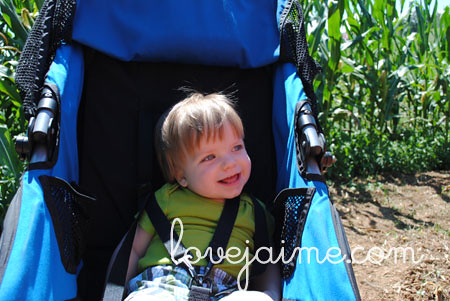 The corn maze has changed their haunted maze into a family friendly maze featuring Spookly the square pumpkin. It’s a pretty simple maze and each stop had a part of the Spookly story. We got to read the entire story in about 20 or 30 minutes – it was a lot for the baby to see, and he could see the fun pictures on the boards with the story. 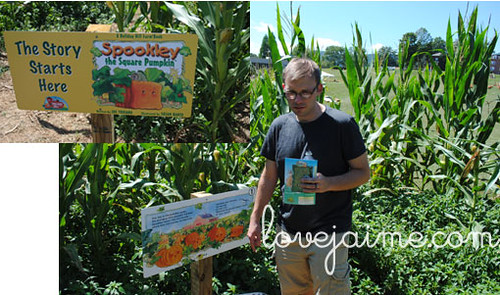 Oh, and it was hilly, so he had a pretty fun, bumpy ride. The maze also had a few photo places where you could take your pictures. We stopped at one (and saw a slightly more fun board for photos, but we were afraid to take the baby out of the stroller again – he was getting a bit antsy.) 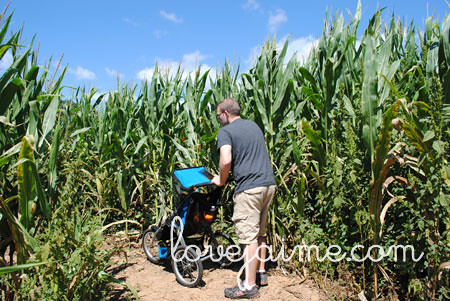 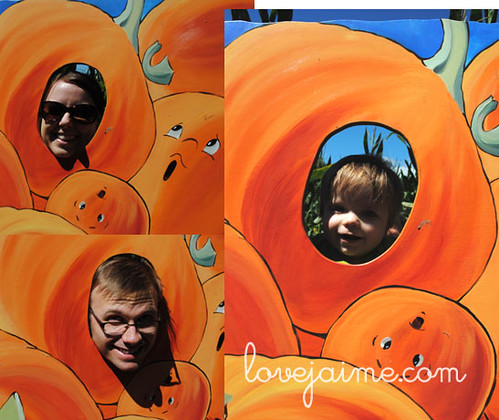 Once we exited that maze, we had 3 mazes to choose from. The long one is 2.3 miles, the middle maze is about 1.2 miles and the short maze was only 0.3 miles. We went with the short maze since we just did the Spookly maze. It was pretty easy, and still fun for the baby. We contemplated doing one of the longer mazes, but thought better of it and opted for the hay maze (that ended in a pit of corn!) I think we spent between 10 and 15 minutes playing in the corn.

We walked around a little more, and ended up at the corn cannon. It’s just what you think it might be. You stick a piece of corn in this tube, and can shoot the corn at targets they have set up. (The husband did this. I did not.) 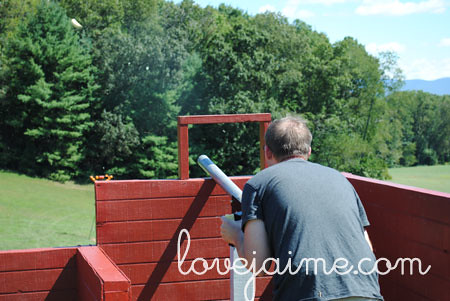 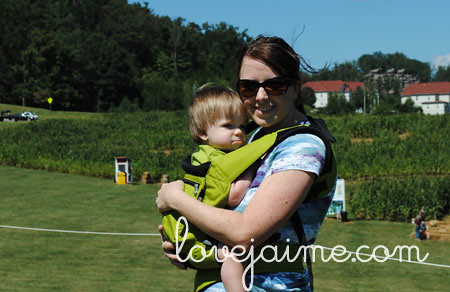 By this point, the baby was done, and was signing “milk.” We made the walk back home where we promptly got his milk and took a two-hour nap. It was a winning afternoon for everyone. 🙂