There is SO MUCH to say here! I’ve been processing the race in my head since Sunday.

We met up by 5:45 to make the drive to Biltmore Estate. We were told that it would take about 20 minutes to get to parking lots/shuttles to take us to the start. We were also told that if we carpooled (three or more in a vehicle) we’d be able to park right at the start. Despite having 3 people in our car, we were directed to one of the lots to catch the shuttle. While we were technically at the estate by 6 a.m., the lines were so long to get in, it took forever.

Originally, they were going to check bib numbers, IDs and Biltmore tickets to get onto the estate. By the time we got through, they weren’t checking any of those, just passing everyone through. (I don’t know if they checked these things beforehand, but maybe they were, realized how much it was backing people up, and stopped checking?)

The temperatures were in the 20s, with a windchill of 8. I wore two shirts, a jacket and a throw away fleece sweatshirt. I also had on two pairs of gloves, with handwarmers in between glove layers. I wore my cold weather pants. I felt like I needed 3 pairs of pants. 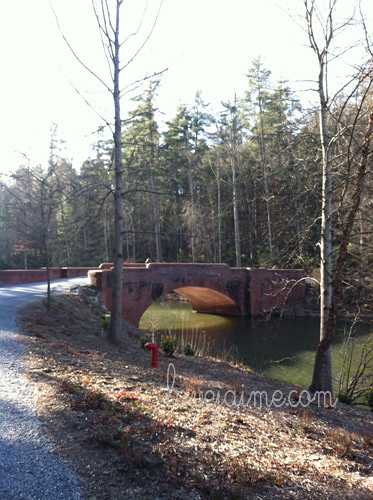 The first two miles were fine. They went by faster than we anticipated. Just after mile 2, I ditched the throw away fleece. I almost regretted it immediately. I warmed up quickly, though. At least my upper body. My fingers didn’t warm up until around mile 4. My feet were frozen, but I think they started feeling better between miles 4 and 6. 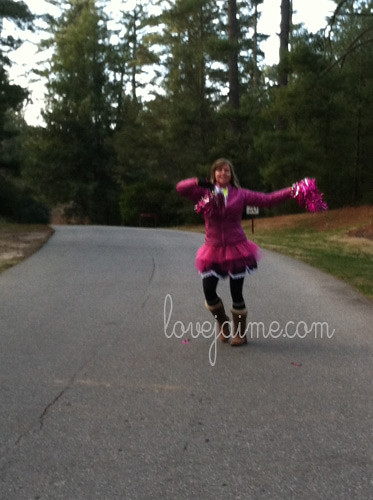 A cheerleader early in the race. 🙂 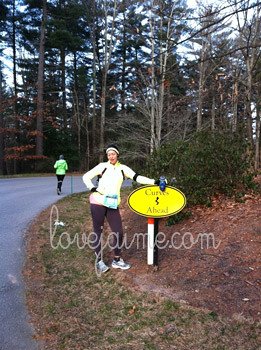 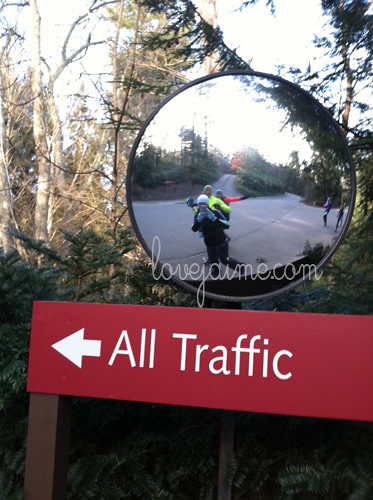 We got photobombed! (Which is totally fun.)

Between miles 7 and 8, we saw the Biltmore House. The race was still fun, people were enjoying themselves, and a lot of people were stopping for the photo opportunities. Good times. 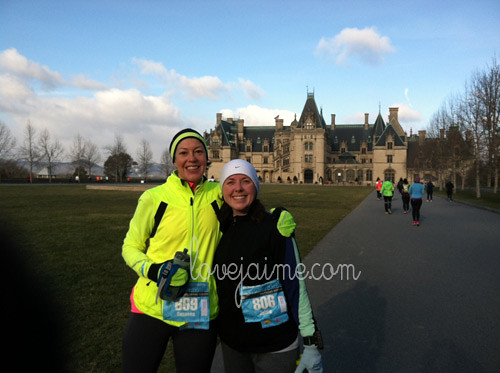 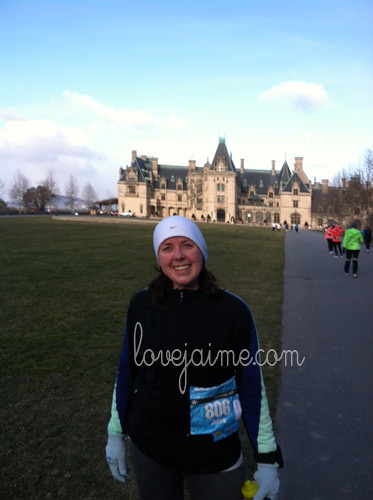 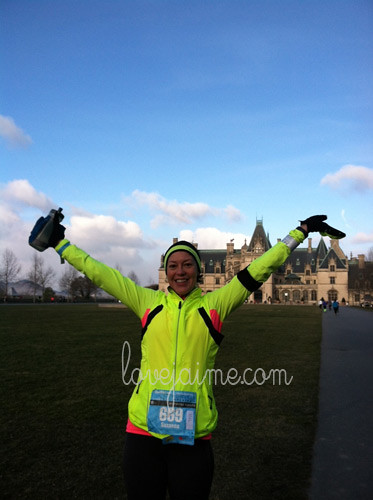 We ran through the gardens and it was still somewhat pretty (as pretty as can be when it isn’t spring, and it’s freezing.) About two miles later, we found ourselves next to the river running against some serious headwind. Oh my word. The wind.

Then we took a turn to go over a bridge and begin another loop. I was still feeling mostly okay. I was drinking some Gatorade, and occasionally taking a Gatorade or Gu chew. (I picked up a pack of Gu chews later in the race.) 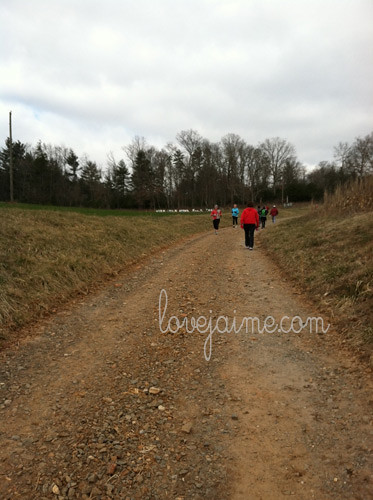 This is where things became a blur. I recall mile 13. We were on gravel by that time. The big rocky gravel roads were ROUGH. We ran downhill to the mile 13 sign and turned around to run back up. We passed this house and I thought it was so interesting to see an abandoned house on the estate (which is why I stopped for the photo.) 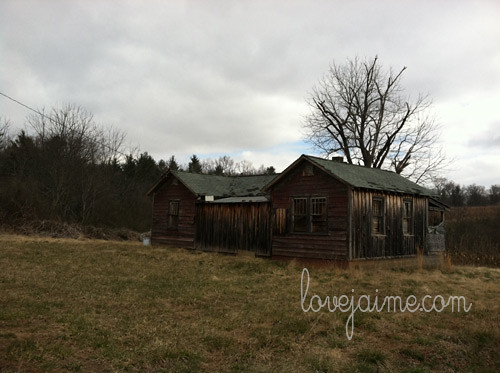 At mile 14, my calf muscle was in knots. I could have benefited from someone helping me massage/stretching it out. The closest aid station (we were told) was back at mile 11 or up ahead at mile 19. Aid station fail. I kept going. Between 14 and 15, I heard a voice up ahead, and realized I KNEW that voice! It was a woman I ran my first marathon with (she was one of my Team in Training coaches.) I called out, “Brenda? Is that you??” And she turned around and saw me. I would see Brenda and Pat (someone I trained for Kiawah with) many times throughout the rest of the race. 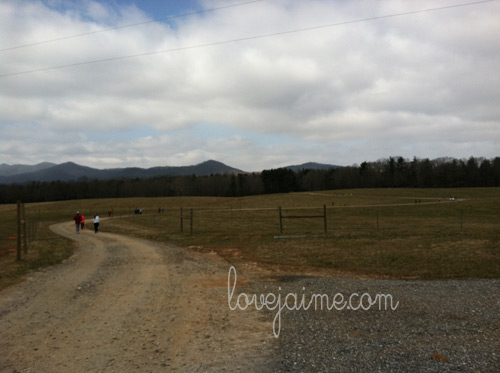 We were still encountering a lot of gravel roads, and I was having a bit of trouble seeing. I thought it was just the dirt blowing in my eyes. At mile 17, though, I recognized the feeling. I was dehydrated and fading quickly. I told Suzanne that she should run on without me. I know she felt bad, but in that moment, I just wanted to finish and I didn’t want to hold her back.

Mile 17 was the point where I started eating trail mix I had thankfully packed the night before. This was also the point where we were running downhill over a timing mat and the mileage sign was for mile 20. We had to loop around and back up “dam hill” (seriously. that’s what it was called) a second time to get to mile 20. I hated this part.

This may have also been the first place that I thought getting a ride back to the finish line wouldn’t be so bad after all.

Mile 18 was the point I pulled my iPod out. So glad I bought an arm band for my iPod last week. (It arrived on Friday.) I listened to a lot of Taylor Swift for the rest of the race. Pretty sure that she convinced me that I may never, ever, ever, ever run another full marathon.

I got through mile 20, back down dam hill and to the bridge that crossed back over to the wide open field along the river. This time, I was running with the wind behind me, but I knew that would change whenever we had to turn back around. This loop and out and back stuff was so difficult mentally. We ran out to around 22.5 and then you take a left to get to mile 23, where they were handing out orange rubber bands – you had to have this rubber band in order to get a medal. (So you couldn’t just turn around at mile 21 and cut a couple of miles out.)

It was back into the wind at this point. I could hear the finish line. And once I got to mile 25 or so, I could see more people, cars, and where the finish should have been.

Finally. I could see the finish. And I went up a short hill where a girl told me that I was almost there. The finish was literally on my left, but I had to LOOP AROUND IT and run for another quarter mile before actually finishing. That’s right, runner friends. You had to pass the finish before you could actually finish. At this point, I knew this whole event was one cruel joke and I was no longer finding it funny.

I finished in 5 hours, 55 minutes. My slowest marathon ever (this was also my fifth. There are a lot of 5s tied to that day, now that I look back at it.) When I finished, I was immediately wrapped in a fleece blanket and a medal was placed around my neck.

The medal was a piece of wood. And there is no weight to it at all. I’ve seen a lot of complaints about the medals, and I think many of us agree that we were very underwhelmed by this “medal.” 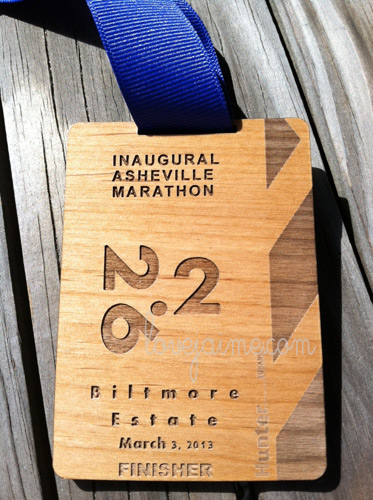 Suzanne found me at the finish, and we walked to the food tent. There wasn’t much to see there either. I grabbed two quarters of a bagel (I didn’t even see any cream cheese) and grabbed a Sprite and a water. There was beer for those who wanted it. (I did not.)

We walked into a tent where they were doing complimentary chiropractic adjustments and massages. I passed because it just wasn’t organized and I couldn’t tell where lines began or ended. I never did see a medical tent, but I’ve read that there was one. I’ve also read the there were many reports of hypothermia. The winner of the race was even taken to the hospital.

We finally made it back to the shuttle bus and taken back to the car. It took another 20 or so minutes to get off the property and I made it home a little before 3 p.m. (I finished at 1:25.) I stopped at Sonic before I got home because I needed something and tater tots sounded amazing.

If you’ve made it through this post, I’m impressed.

Now, here’s where I went wrong. I realized last night that I did not take in as much as I thought I had, fuel-wise. I trained with Gatorade chews and some Gu chews. I had a total of 16 chews with me and last night I saw that I had 10 left over. I only took in 120 calories in 26.2 miles. That doesn’t include the Gatorade drink that I had with me. I finally finished my bottle of Gatorade around mile 18.5 and refilled it at mile 19 with the drink they had on (Gu brew, I believe.) I only drank about half of my bottle before finishing the race.

The impact of running on the gravel killed my knees. They are bruised. (I noticed this during a bath yesterday.) I’ve taken several Epsom salt baths and have used so much BioFreeze to help my knees. Stairs are awful. My calf muscles aren’t as bad as I thought they’d be.

My face was wind/sun burnt. It seems to be better today, but oh the wind. The cold definitely had a part in my dehydration. (I recovered with chocolate milk, which really did help a lot Sunday afternoon.) In my mind, I thought I was eating and drinking so much more. In reality, I wasn’t eating or drinking nearly enough.

Will I do this race again? No. It was a mess to get to the start and there wasn’t enough support on the course. I wasn’t aware of the aid stations (or lack thereof) until an email on Friday. The volunteers were amazing on the course, but the race was charging spectators $35 to watch at the start/finish and along the river. It wasn’t until a couple of weeks ago that passholders were told they could watch for free. I didn’t feel like there was much support at the finish and I was very letdown by the lack of organization.

I’ve run really large marathons (Nashville) and a much smaller marathon (Kiawah). I knew I didn’t like the repeated loop like I ran in Kiawah, but at least we were supported if we needed medical attention or water or food. And there was food to go around at the finish. Even for those of us who finished so late in the game.

I’m officially a five-time marathoner, so I guess there’s that….

Date night at the Grove Arcade in Downtown Asheville